Andy Dunn, founder and CEO of Bonobos Inc., presents on the challenges of building a profitable, lasting e-commerce company. If you ever wanted an ecommerce primer in under 60 minutes, this is the video to watch.

“If you’re selling other people’s brands, you are competing not via a local group of competitors but with everyone.”

“eBay’s asleep-at-the-switch AdWords management style not only made them look stupid to searchers – those irrelevant ads also cost a brand a ton of money.”

Read this if you’re a European ecommerce company with an interest in going beyond your domestic market.

For a long time, folks have suspected Google would formally enter the retail and ecommerce space in a big way. They begun with the Google Merchant Center, introduced in 2009. They also have reminded people that despite the onset of the era of social, people still shop online with the search box.

However, similar to Ebay, they never competed directly with retailers and in essence, their core advertising customers – the mass merchandisers and specialty retailers who spend millions each year on the search engine.

What’s changed? Google Shopping Express, an engineer’s approach to the daily shop. The service has ramped up this year and is rolling out to more and more cities: 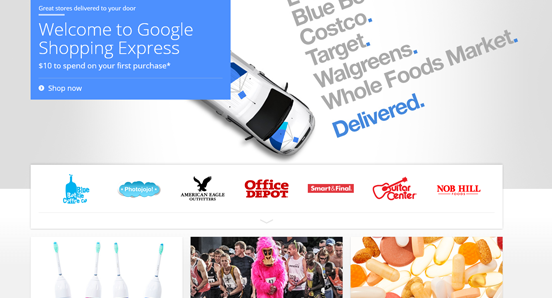 And in more and more categories: 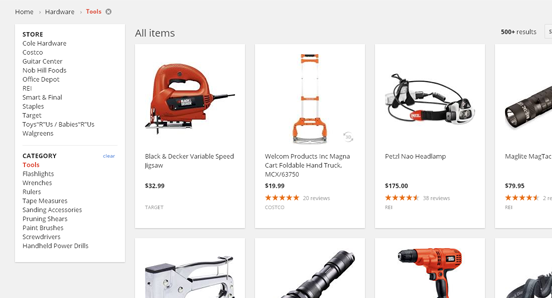 Current competitors in the space, aside from retailer’s own delivery services, include Ebay Now plus the likes of Instacart and Boxed. What marks Google out from these startups is sheer resource; it’s clear they can scale much faster and reach more consumers.

They also have the treasury to finance what must be considered a risky venture with uncertain economics – just Google Webvan and read about the logistical nightmare of ‘the last mile’ and so-on. 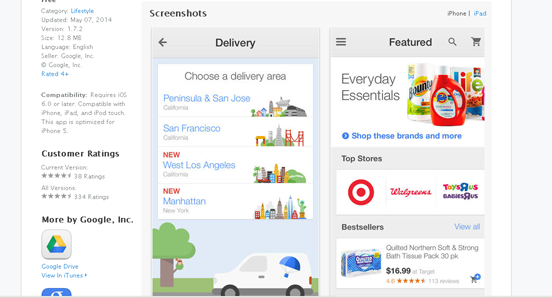 Overall however, it can be argued that this is great news for consumers and what will be interesting to watch is the innovation. Clearly, the battle with retail delivery is won on service and convenience; how friendly and efficient are those  army of ‘shoppers’ and how slick the user experience is.

Amazon still has a firm grip on the mindset (and wallet) of the average consumer in ecommerce; could Google or perhaps a challenger like Instacart change this? What’s your thoughts on retail delivery services?

What makes markets attractive is their size and potential to establish monopoly; B2B – both a huge and fragmented market – is the huge ecommerce opportunity nobody talks about. 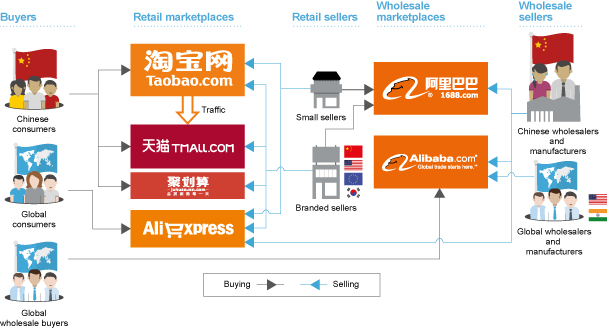 Alibaba Group released their SEC F-1 filing this week and in it we learn a lot more about the world’s largest ecommerce company. There’s plenty of amazing numbers to be amazed at – 231 million active buyers and 20% of GMV (Gross Merchandise Volume) attributable to mobile are two stunning statistics alone.

Some other things I found interesting in the F-1. First of, they’re clearly just getting started:

Our business benefits from the rising spending power of Chinese consumers. China’s real consumption in 2013 was 36.5% of total GDP, which is a rate that is significantly lower than that of other countries, such as the United States, which had a consumption penetration rate of 66.8% in 2013, according to Euromonitor International. We believe that growth in consumption will drive higher levels of online and mobile commerce.

The ecommerce (read ‘commerce’) market in China is massive. If Alibaba can continue to maintain and grow share, it will be one of the world’s great technology and commerce companies alongside Walmart, Amazon etc if it isn’t already.

Another interesting anecdote from the F-1:

China’s offline retail market faces significant challenges due to few nationwide brick and mortar retailers, an underdeveloped physical retail infrastructure, limited product selection and inconsistent product quality. These challenges in China’s retail infrastructure, which we believe are particularly acute outside of tier 1 and 2 cities, are causing consumers to leapfrog the offline retail market in favor of online and mobile commerce.

This is less concrete but nevertheless extremely plausible. In essence, Alibaba believes that China and more or less emerging economies in general will skip much of what we know in Retail. This is globalization taking effect but with a twist. Specifically, why bother with fixed cost – or bricks and mortar – when you can substitute it with the Internet, software and logistics?

This is part of the broader economic question; is globalization a case of copying what’s already out there or does Alibaba represent a much more dramatic leap about to be achieved by emerging companies and economies?

As many speculate whether Alibaba can top Walmart’s total retail sales or beat Amazon in global ecommerce, it’s worth remembering it’s a different company to the aforementioned:

We are the largest online and mobile commerce company in the world in terms of gross merchandise volume in 2013, according to industry sources. We operate our ecosystem as a platform for third parties, and we do not engage in direct sales, compete with our merchants or hold inventory.

This is not to say they won’t enter the world of true retail and maintain inventory but they’re a technology outfit. It could be argued Alibaba is different to anything we’ve seen in technology or commerce, it’s a truly unique company.

Indeed, it will be fascinating to hear forthcoming commentary on future plans now they’re public and secondly how they plan to take on the world now that the domestic Chinese market has been won.